« When I first received my new riffler from Noel Liogier, I wasn’t quite sure what to make of it.

I’ve never used one before and have no idea where they could be handy. As I held the tool for the first time, it seemed so tiny… almost too delicate to be useful…

The form itself is quite unique. Think of it as a double-ended rasp in miniature.

On one end of the riffler is a straight tongue shaped with a taper… similar to a knife file, but cut with rasp teeth. The teeth are the same on both sides of the tongue and cut into the edge as well. 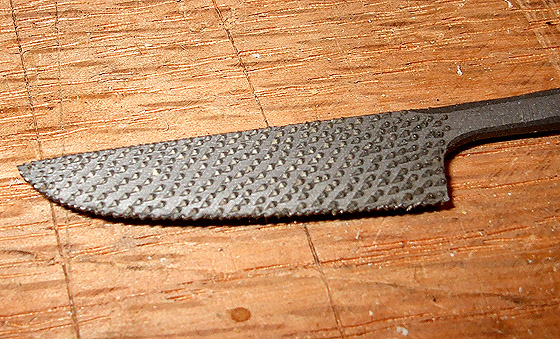 On the other end is another tongue, but this one is concave on one side and convex on the other… well… kind of like an actual tongue with rasp teeth on both sides. And just like the rest of the Liogier range, the teeth are hand-stitched. 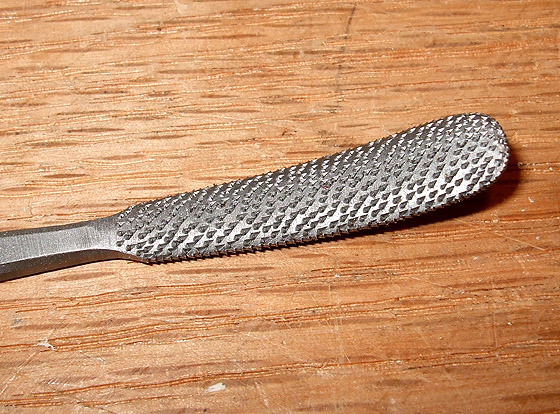 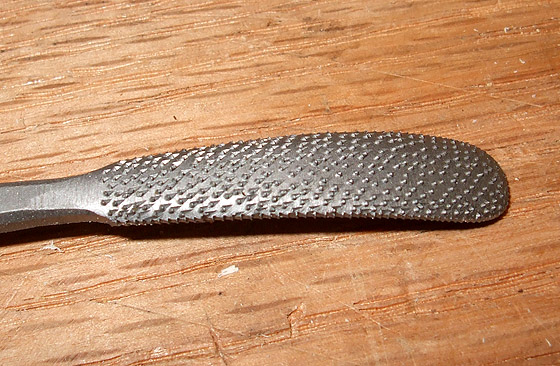 So, much as I am often inclined to do, without a clue as what this tool could be used for, I turned to history to help me decipher its typical uses.

I remembered seeing a riffler in one of Andre Felibien’s plate’s… but I don’t read French, so I didn’t get much help there other than the picture, which tells me that they were prominent in 17th century French joinery, of course.

But in Joseph Moxon’s ‘Doctrine of Handy Works’ there is no image of a riffler. It is generally accepted that Moxon took some of his images from Felibien’s work. But why no riffler? Perhaps it sank in the swim across the Channel?

Which lends itself to something I remember Noel Liogier telling me; that while they are selling a good amount of rasps in America now, they sell very few rifflers here. And he also said that conversely rifflers are very popular on the Continent. Could rifflers be the rasping equivalent of frame saws? Perhaps.

I next looked up ‘riffler’ in R.A. Salaman’s Dictionary of Woodworking Tools and found a brief and obvious description. It did however include mention of use by pattern makers. Interesting. But there aren’t many patternmakers left in America. That wasn’t much help, either.

So as a month passed by with the little riffler sitting above my bench, what choice was I left with but to finally put the teeth to wood and see what secrets I could glean from its soul?

And I had the perfect project for it… a replacement sash saw tote for a customer based on a Kenyon & Sykes tenon saw in my collection. The saw tote is made of holly… a tight grained hardwood that is similar to cherry and apple in texture, but almost pure white.

With the shape of the tote refined, at this point I would normally begin shaping the lamb’s tongue with files, but files cut somewhat slowly. I’ve always wanted a faster way to rough out the tongue shape, and it seemed to be perfect for the riffler. 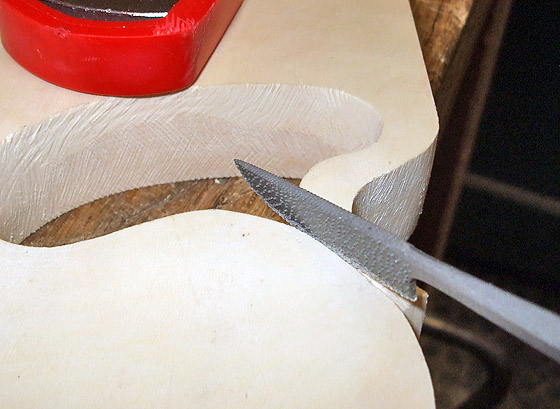 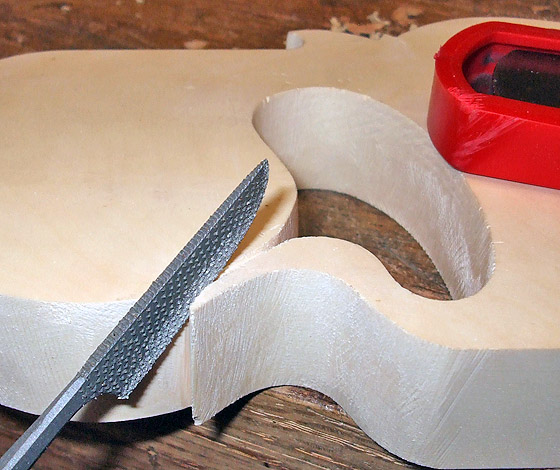 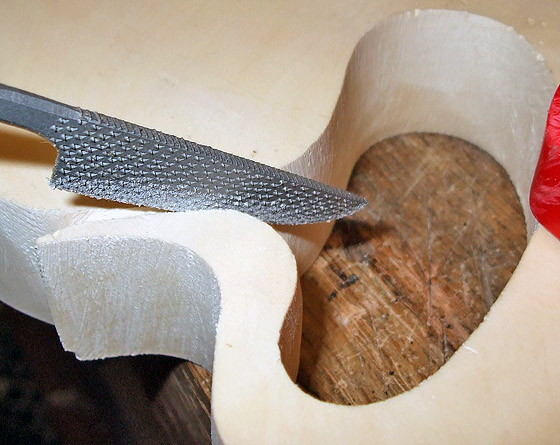 And it was here that the tool really shined. The cut was fast… fast… fast! I wasn’t expecting a delicate tool like this to remove so much material so quickly, but it did. And then some!

I was assuming it would cut more like a file… slow and smooth but it really does cut like a small rasp (I know… I know… I never was too bright). As I moved the tool back and forth in the now deepening tongue groove, with small inclinations to either side I was able to widen and remove material quickly. What a boon!

With the boundaries of the tongue defined, I moved on to the next step of rounding the outer shape of the tongue… a step I have also always performed with files. But the opposite end of the riffler almost begged to be put to some curves… 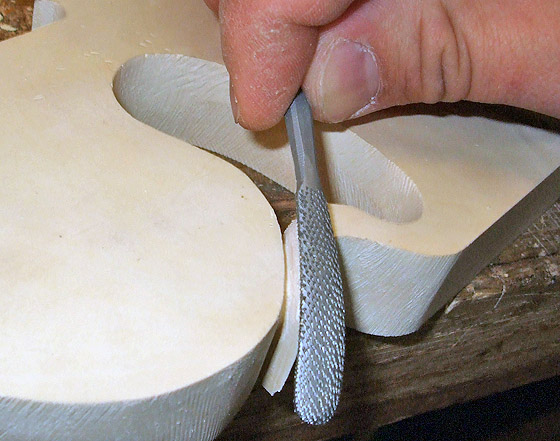 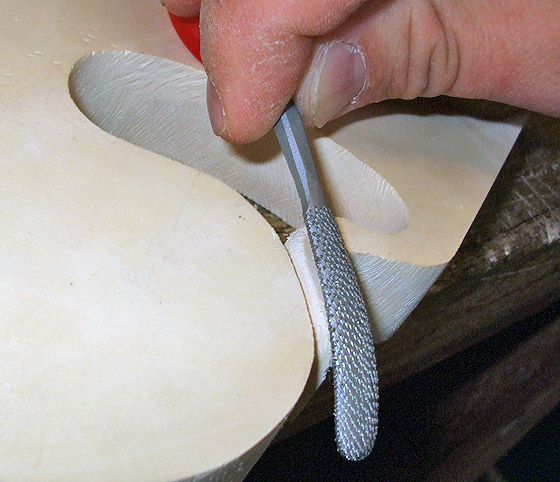 …and it easily took the corner of the tongue off. Almost too quickly! It wasn’t but two or three strokes and the outer shape was perfect.

I was beginning to wonder if ‘riffler’ is the French word for ‘lamb’s tongue shaping rasp’?

With the basic shape of the tongue defined, I flipped the riffler over again to the knife side and further widened the grove and smoothed the transitions to the cheek. 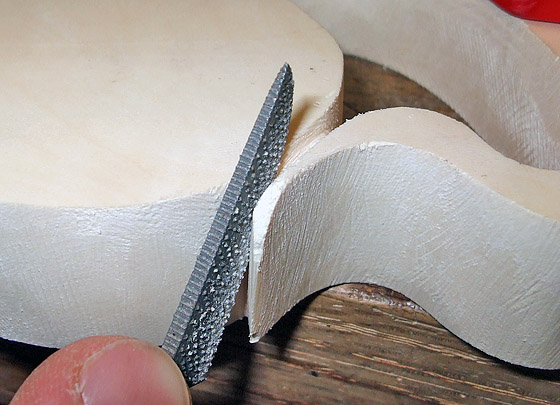 After this one, I shaped another lamb’s tongue in beech and one in rosewood as well, and without a doubt the most striking element of this tool is its speed.

This is no delicate tool. It’s small, and capable of fine work, but quick work. I think I was expecting more of a finishing tool, but this is a work-horse tool. It can rough and refine with the rest of my rasps, but on a smaller scale. 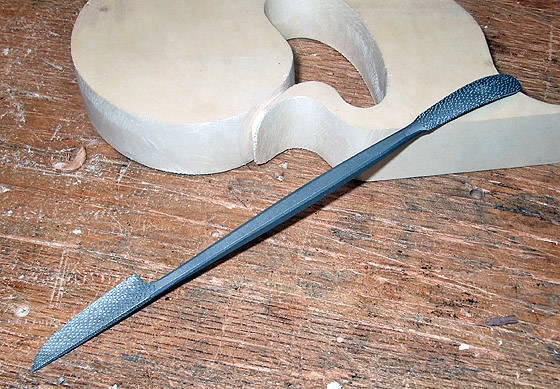 All in all, the more I use this little Frenchman, the more I am seduced by his charms. Sure, he has a funny accent and eats a lot of cheese, but don’t let those pedestrian qualities fool you… this little guy packs quite a wallop.